The Griffith lab is a combined research group driven by the interests of twin scientists Malachi Griffith and Obi Griffith. The focus of the lab is on developing methods of applied bioinformatics for personalized medicine and improved cancer care.

Our research is committed to development of open access and open source resources for cancer genome analysis. Research projects cover a wide spectrum of cancer informatics and clinical statistics with an emphasis on translation and application. Specifically, we use computational methods for the analysis of large cancer datasets at the molecular level (DNA, RNA and protein) to identify markers for diagnosis, prognosis and drug response prediction in cancer. We have contributed to the early development of methods for analysis of transcriptional regulation (ORegAnno) and RNA-seq analysis and visualization (ALEXA-seq Platform).

The group is engaged in a large number of tumor sequencing projects for breast, lymphoma, glioblastoma, lung, and other cancers, investigating primary, relapse and drug resistant tumors. To this end we have worked with others at the McDonnell Genome Institute to develop end-to-end pipelines for clinical cancer sequencing that automate state-of-the-art methods for sequence alignment, somatic variation detection, RNA sequence analysis, and the integration of these data types into user-friendly reports of the most clinically relevant genome and transcriptome changes in a tumor or cohort of tumors (Genome Modeling System). To aid in this effort our group has developed software, databases, knowledgebases, and web tools for interrogation of the druggable genome (DGIdb), identification of cancer driver mutations (DoCM), interpretation of clinically actionable variants in cancer (CIViC), and genomic visualization (GenVisR). The group is also actively involved in the identification and scoring of tumor neoantigens and development of related software for design of human cancer vaccines (pVACtools). We are also working with organizations such as the Global Alliance for Genomics Health (GA4GH) to help define data models and standard for clinical translation of genomics data, in particular through our leadership of the driver project: Variant Interpretation for Cancer Consortium.

In addition to our basic and clinical research interests, we are also passionate about the scholarship of teaching and learning. We have made substantial contributions to the training and education of tomorrow’s bioinformaticians through our involvement in CBW, CSHL workshops and the BioStars forum. We have developed online courses for RNA sequence analysis, Genomic Visualization in R, and precision/personalized medicine bioinformatics.

ER+ luminal tumors are the most frequent subtype of breast cancer. Stat1−/− mice develop mammary tumors that closely resemble this cancer subtype. To identify transforming events that contribute to tumorigenesis, we performed whole genome sequencing of Stat1−/− primary mammary tumors and matched normal tissues. This investigation identified somatic truncating mutations affecting the prolactin receptor (Prlr) in all tumor samples. Targeted sequencing confirmed the presence of these mutations in precancerous lesions, indicating this is an early event in tumorigenesis. Functional evaluation showed that co-expression of truncated and wild type Prlr led to aberrant Stat3 and Stat5 activation downstream of the receptor, cellular transformation in vitro and tumor formation in vivo.

We reported the first comprehensive genomic analysis of a case of Mixed fibrolamellar hepatocellular carcinoma (mFL-HCC). No common HCC-associated mutations were identified. The very low mutation rate of this case, large number of mostly single-copy, long-range copy number variants, and high expression of ERBB2 were more consistent with previous reports of pure FL-HCC than conventional HCC. In particular, the DNAJB1:PRKACA fusion transcript specifically associated with pure FL-HCC was detected at very high expression levels. Subsequent analysis revealed the presence of this fusion in all primary and metastatic samples, including those with mixed or conventional HCC pathology. A second case of mFL-HCC confirmed our finding that the fusion was detectable in conventional components. An expanded screen identified a third case of fusion-positive HCC, which upon review, also had both conventional and fibrolamellar features. This screen confirmed the absence of the fusion in all conventional HCC and adjacent non-tumor liver samples. These results indicate that mFL-HCC is similar to pure FL-HCC at the genomic level and the DNAJB1:PRKACA fusion can be used as a diagnostic tool for both pure and mFL-HCC. 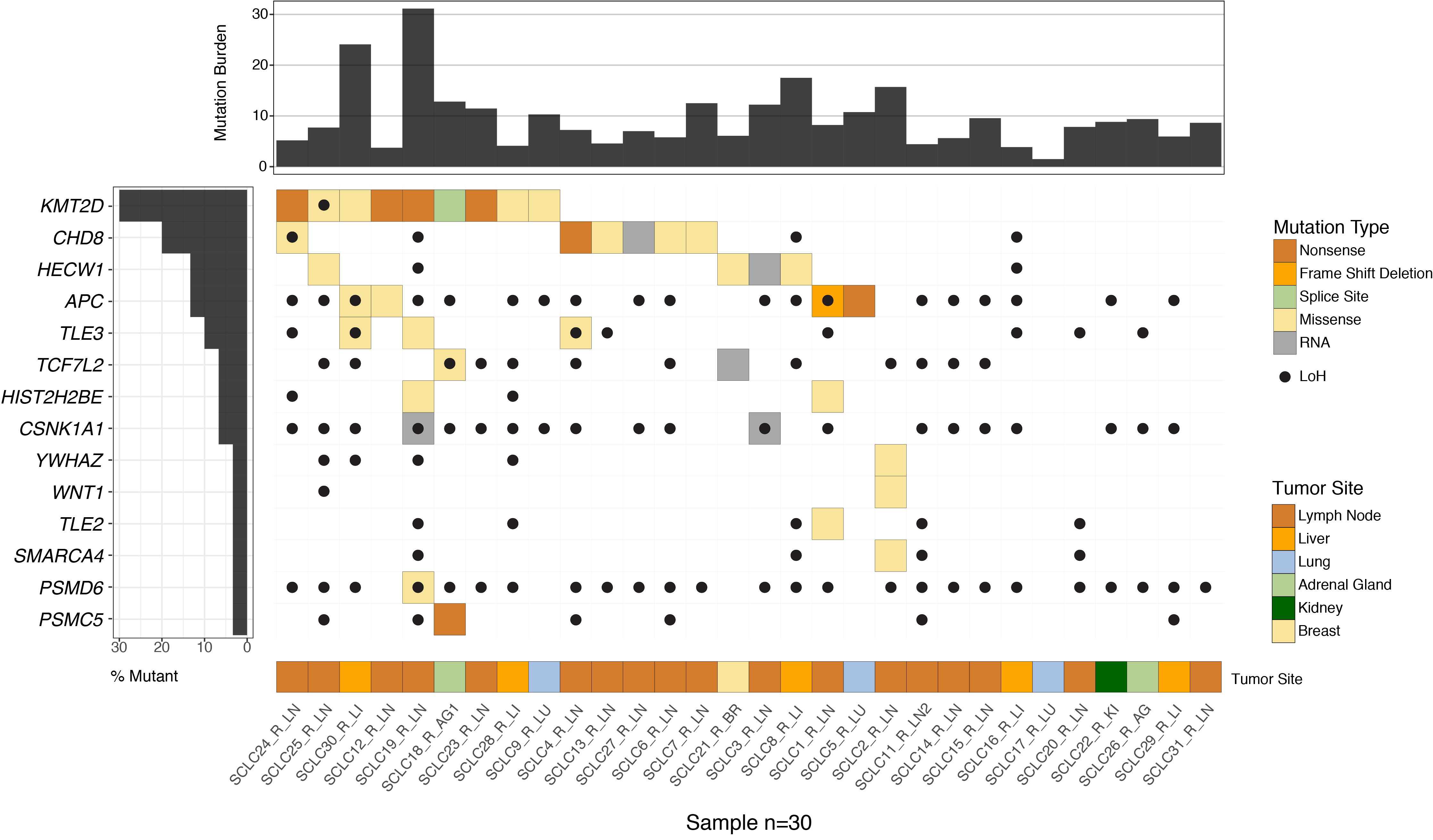 Follicular lymphoma (FL) is the most common form of indolent non-Hodgkin lymphoma, yet it remains only partially characterized at the genomic level. To improve our understanding of the genetic underpinnings of this incurable and clinically heterogeneous disease, whole-exome sequencing was performed on tumor/normal pairs from a discovery cohort of 24 patients with FL. Using these data and mutations identified in other B-cell malignancies, 1716 genes were sequenced in 113 FL tumor samples from 105 primarily treatment-naive individuals. We identified 39 genes that were mutated significantly above background mutation rates. CREBBP mutations were associated with inferior PFS. In contrast, mutations in previously unreported HVCN1, a voltage-gated proton channel-encoding gene and B-cell receptor signaling modulator, were associated with improved PFS. In total, 47 (44.8%) patients harbor mutations in the interconnected B-cell receptor (BCR) and CXCR4 signaling pathways. Histone gene mutations were more frequent than previously reported (identified in 43.8% of patients) and often co-occurred (17.1% of patients). A novel, recurrent hotspot was identified at a posttranslationally modified residue in the histone H2B family. This study expands the number of mutated genes described in several known signaling pathways and complexes involved in lymphoma pathogenesis (BCR, Notch, SWitch/sucrose nonfermentable (SWI/SNF), vacuolar ATPases) and identified novel recurrent mutations (EGR1/2, POU2AF1, BTK, ZNF608, HVCN1) that require further investigation in the context of FL biology, prognosis, and treatment.

Comprehensive genomic analysis was performed on patient derived xenografts for oral squamous cell carcinomas (OSCC). We found PDX samples were largely correlative with the primary tumors from which they were derived. PDX models were able to retain the heterogeneous mutational landscape and clonal architecture of tumors. Somatic differences between the PDX and corresponding OSCC primary samples consisted primarily of low-frequency mutations, making these xenografts ideal models for exploring OSCC tumor biology.

CIViC: a community knowledgebase for expert crowdsourcing the clinical interpretation of variants in cancer 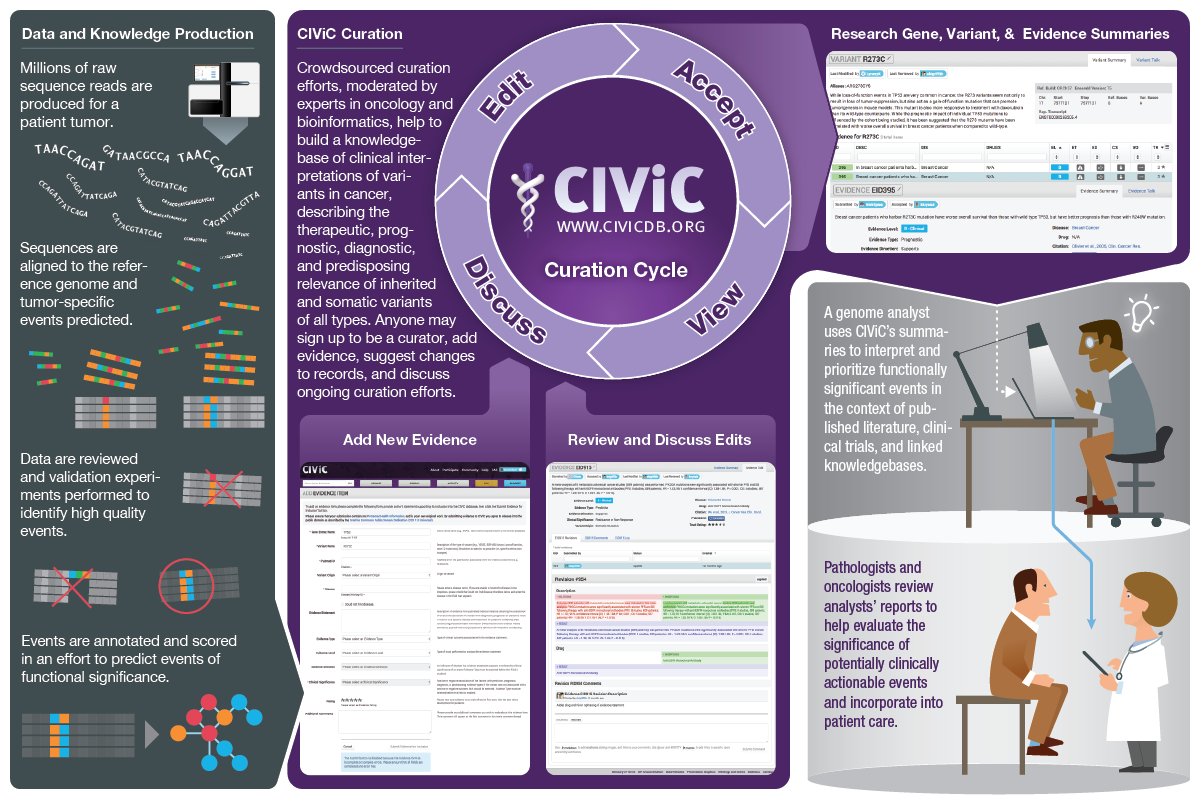 CIViC is an expert-crowdsourced knowledgebase for Clinical Interpretation of Variants in Cancer describing the therapeutic, prognostic, diagnostic and predisposing relevance of inherited and somatic variants of all types. CIViC is committed to open-source code, open-access content, public application programming interfaces (APIs) and provenance of supporting evidence to allow for the transparent creation of current and accurate variant interpretations for use in cancer precision medicine.

Tumors are typically sequenced to depths of 75-100x (exome) or 30-50x (whole genome). We demonstrated that current sequencing paradigms are inadequate for tumors that are impure, aneuploid or clonally heterogeneous. To reassess optimal sequencing strategies, we performed ultra-deep (up to ~312x) whole genome sequencing (WGS) and exome capture (up to ~433x) of a primary acute myeloid leukemia, its subsequent relapse, and a matched normal skin sample. We tested multiple alignment and variant calling algorithms and validated ~200,000 putative SNVs by sequencing them to depths of ~1,000x. Additional targeted sequencing provided over 10,000× coverage and ddPCR assays provided up to ~250,000x sampling of selected sites. We evaluated the effects of different library generation approaches, depth of sequencing, and analysis strategies on the ability to effectively characterize a complex tumor. This dataset, representing the most comprehensively sequenced tumor described to date, serves as an invaluable community resource.